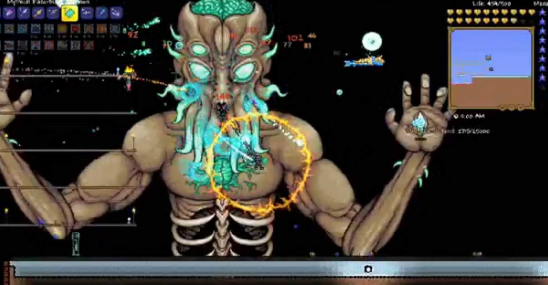 The boss has 145 000 health, and he’s a pretty tough boss defeat the first time you fight him, but he does have some nice drops, and he’s worthwhile defeating although some of the items which he drops you’ll have to farm the boss.

The moon lord has two hands and also the main head which needs to be killed before the middle of the boss comes up and is allowed to be attacked. And the two arms or hands on the side of the boss are positioned usually far to the left or right of the player, but they can move and make sweeping attacks.

And they also have eyes in the middle of them which can spawn eyes on the outside which shoot into the player and rush towards them. While you’re fighting him, this vulnerable eye like targets which are in the center of both of these hands does close up sometimes.

So you can’t attack them, and then they also open up and are available for attack. The only part which you need to destroy actually to defeat the full boss is the core which is the center of the boss’s body, but that only becomes available to destroy after you’ve destroyed other parts of the boss.

The center of the eye which is an eye-beam laser also fires directly through objects so that’s also a really hard attack to dodge unless you can jump over it or have a lot of room to do so the main terraria moon lord head has 45 000 health and 50 defense. Each hand of the moon lord has 25 000 health and 40 defense. And the core, which is the main body, has 70 defense and 50 000 life points.

The Method Of Defeating The Terraria Moon Lord

You can use a weapon to go through the blocks so get the bonus of a little bit more defense and less health loss as well as being able actually to hit the boss through it.

And the solar eruption is an explosive weapon which does a lot of damage, so this is a great weapon versus the moon lord would say that this is probably the best weapon to fight the terraria moon lord with before you get zenith which is the best sword in the game.

You need any other NPC buffs are a bonus, and the pool of honey is required to have that constant regeneration buff. You can also place the small heart-shaped lanterns the heart lanterns which are placed on the left side of the honey pool, which you might be able to see next to the campfire.

The hot lanterns the campfires and the honey pool are just there for additional health regeneration and bonuses to try and prevent dying as fast. If you want to try and move around with a bit more mobility, then you can always use the cosmic car keys which is the required item to summon the flying source amount to fly around and dodge a lot of the attacks.

The UFO mount is really good to dodge all the attacks. But defeat the moon lord from the air because he just moved so fast, but all it is is patience persistence a lot of time to just constantly keep healing and eventually you will defeat the moon lord using this Method.

The best strategy which is to have an area where the nurse and the dryad are summoned so they can really help you with the boss.