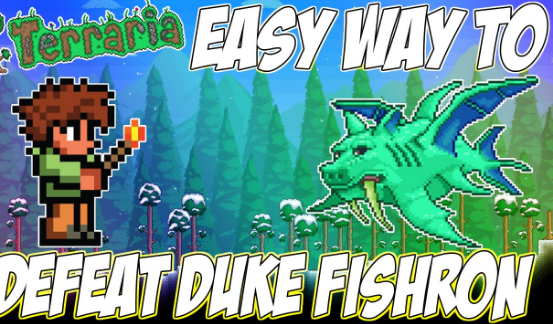 How to Defeat and Kill Duke Fishron

Fishing is a very calm and leisurely activity in Terraria Duke Fishron. It’s a relaxing time for players to get away from boss fights and monsters, except it’s not. Something shockingly powerful lurks beneath Duke Fishron. The mutant sea monster of Terraria is raw power able to summon exploding bubbles and shark-filled tornadoes as well. There’s simply no way to stop that.

This step will equip you with some great armor and make sure you have a great Terraria weapon. For your armor, and you’ll need something of the high tier, whether it be turtle or beetle, specter armor, or shroom ID armor.

You’ll want something that can shoot in a mostly straight line and has a really good range. Once you’re well equipped with some great armor and a sweet weapon. You’re going to need a complete

Step 2: Get a truffle worm

Truffle worms are caught with a bug net and are found in glowing mushroom biomes and are quite possibly the most frustrating thing to deal with in the world since if you get too close, they burrow away very fast.

You’ll see in just a bit since glowing mushroom biomes aren’t too big by themselves. There’s less room for truffle worms to spawn. So a strategy is to spend the big bucks on the steampunker’s contaminator and purchase a ton of blue solution.

Kill everything else that isn’t a truffle worm because not only can they take up the mob cap and prevent more truffle worms from spawning. They can also kill the truffle worm itself, making them even more extraordinarily inconvenient. You can also read Terraria Cell Phone Guide.

When that you’ve power successfully struggled through getting a handful of truffle worms, step three is going to be to build your arena.

Now you’ll need a couple of items from your friendly neighborhood NPCs to complete this arena setup.  This is kind of like the tutorial for the planetary boss fight. You’ll need two teleporters, two levers, a red wrench, a wire cutter, and a whole boatload of wire.

Now you’ll want to head over to your beach where you’ll be able to fight Duke Fishron. You can use either side as long as you’re on the beach. Head on over to the water and build up tall you want to be really high up, but you don’t want to be in space or risk being near it.

If you leave the beach’s biome, much like the fight with planter Duke Fishron will become enraged and be insanely hard to beat. Instead, build up high and build two boxes across from each other, one at the start of the ocean and one at the end.

You’ll put your teleporters in there with the levers and link them all up with wire. Make sure to test it out as well to be safe. This will prevent some of the devastating attacks from Duke fishron from hitting you. Don’t be afraid to put down bonfires as well; there’s a very quick and brief disclaimer do not keep the platform blocks. Once you’re all finished with your arena, this leads to the final step. 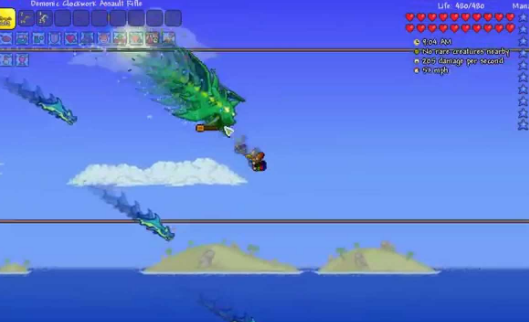 Let’s summon and kill Duke fishron; drink up all your buff potions, go fishing to see with that shuffle worm, and fly up to your teleporter.

Make sure you don’t have them up when you summon him. You want to avoid these giant sharks does at all cost. They do an insane amount of damage, and sometimes, a shark or two could get into your teleporting room.

If that’s the case, try and teleport immediately. They do spawn after a while, keep teleporting on back and forth, and dodge those attacks. Notice how, after getting health down a certain amount, and goes into another more devastating form. And now as a tax get much stronger and faster. It would help if you teleported before it reaches you.

Now the shark runs that spawn from the tornados died on impact from hitting the blocks of your teleporter room, so the worry with them should be minimal. Also, sometimes a shark runs dead bodies kind of add up in the room, and there are their chunks and bits are everywhere, so make sure you know where that lever is.

Keep on gunning is a massive amount of health down and teleport before he gets too close. Don’t be afraid to teleport, too, if you need to avoid a barrage of his bubbles. Teleport to and fro and stay on top of healing, keep on gunning, and congratulations, you have single-handedly defeated Duke Fishron.

This Terraria Duke Fishron guide will be covering normal and covering the boss how to summon him building an arena strategy for fighting him, armors weapon in preparation the fight itself also cover the drops including the cute Fishron mount at the end. This will include details for all classes and summoner and cover all platforms PC console.